I’m a bit of a news junkie and I pay attention to the factors the stock market reacts to on a daily basis, for no good reason since I don’t actively trade any stocks (I also can’t help myself from being a lookie-loo at accidents on the highway).   I’ve been an aggravated observer throughout the year as short spurts of panic at some confluence of negative circumstances somewhere in the world ripple first through the U.S. stock markets instantaneously, and a few months later through the quarterly results of large cap companies who suffered from temporary paralysis while the market crisis of the month was worked out, and then on to small businesses and consumers as they see the stocks they hold get whacked first during the moment of panic and then again a quarter later.  If everyone turned off CNBC for a year and just paid attention to their customers I think we would be experiencing a much faster recovery, albeit it at NBC’s expense.

The level of overreaction to negative news does seem to be decreasing, and as I talk to other business leaders I find that most are well out of the “hunkered down” state and focused on building their business through the noise. The YPO Global Pulse quarterly survey results hit my inbox last week and although they don’t reflect the “irrational exuberance” that has made business really  fun during the bubbles, they do align with my anecdotal conclusions that the majority of business leaders are operating with increased levels of confidence and are working on growing their businesses.    Confidence among the U.S. CEOs responding to the survey had dropped at the end of the second quarter presumably as the European debt crisis panic worked its way from the markets through actual corporate results, but not to first quarter levels, and then rebounded in the October survey although not all the way back to the April level.  The report also highlights the following encouraging results:

Optimism rises about economic conditions. Respondents were almost uniformly enthusiastic about economic conditions looking six months ahead, and they are more optimistic than they were in the previous quarter. Half of respondents (49%) now expect conditions to improve, while just 12% expect them to be worse. In the previous quarter, the comparable figures were a less  optimistic 42% and 19%, respectively. The current optimistic assessment is shared across firms of all sizes. With respect to sectors, the production and service industries are more optimistic than construction, but for the first time since April, construction industry respondents anticipate improvement in the coming six-month period.
Sixty percent expect higher sales. With respect to sales, firms of all sizes cited stronger sales relative to the same quarter a year ago. The only sector that did not experience such improvement was construction. When asked about sales 12 months from now, survey respondents were almost uniformly optimistic, as almost 60% of respondents expected sales to climb. However, the results overall were only marginally better than what was reported one quarter ago. Survey respondents in production and services</p> 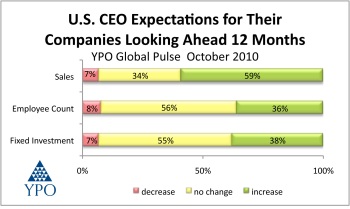 were most enthusiastic, and even firms in the construction industry anticipated a pickup in sales. This rosy outlook was shared by firms of all sizes.
Investment outlook rises to highest level. Investment was higher for almost all firms during the most recent 12-month period. Companies of all sizes reported that investment had risen, but it was most noticeable at the larger firms. The only sector that did not boost investment in the past year was construction. Looking ahead, survey respondents were quite enthusiastic as 38% expect to hike capital expenditures in the coming 12 months. That expectation was shared almost evenly by size of firm. The fixed investment component of the U.S. confidence index rose to 58.2, the highest level since YPO began measuring CEO sentiment in 2009.

Now if we can get everyone to turn off CNBC and add  Marketwatch.com to the list of blocked web sites in their corporate content filters we’ll really be ready for business. Don’t worry, I’ll keep any eye on them for you.  More YPO GlobalPulse survey results and conclusions can be found at http://www.ypo.org/globalpulse/.