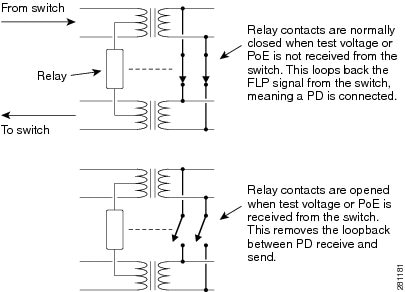 We ran into a rather bizarre problem a while back with a VoIP installation.  The installation consisted of a cisco 3560 48-port PoE switch feeding 35 Polycom phones.  Most of the phones powered up fine but a few wouldn’t boot.

When a working phone was unplugged, another previously-dead phone would come to life, but the one just unplugged would then remain dead when reconnected.

Checking the power requirements showed that the Polycom phones pulled 6 watts.  The switch is rated for 370 watts of PoE power.  Even with all ports active, 6 watts X 48 phones is only 288 watts, well within the switch capacity.  Yet the switch was denying power to more than about 25 phones.  What is going on here?

It turns out that the power budget of the switch isn’t based on the actual power consumed by the phone.  When a PoE device connects, a series of messages over the wire informs the switch of the power requested by the device.  This is per specification 802.3af.

The Polycom data sheet listss the phones as consuming 6 watts.  The switch claims that they’re requesting 15.4 watts each so it denies power to more than 25 phones.  This is a safety feature to prevent the switch from running out of juice.  Obviously there’s a failure to for the Polycom phones to communicate their power needs accurately the switch.

The solution was a subtle configuration issue on the phones.  These Polycom phones have the ability to support “sidecar” modules that snap onto the phone.  The sidecars have extra buttons, lights, and displays

for use by an attendant or receptionist.  By default, the ability to power up to three sidecars is enabled on the phones whether they are present or not. The Polycom phones communicate this back to the switch and claim to need up to 15.4 watts.

To fix this problem, go into the phone menu under Advanced Settings – Network and toggle the setting for EM-Power to “disabled”.  Save and reboot, the phone will now accurately claim to need only six watts and the switch will be happy powering all ports.

Obviously if you are actually using sidecars you’ll need to have the power enabled, and indeed the switch can’t support 48 ports of sidecar-equipped phones.  The calculations are easy, 6 watts per phone without sidecars plus 15.4 watts per phone with sidecars has to sum to less than 370 watts. Remember that it isn’t whether there are actually sidecars installed or the number of them per phone that causes the increased power setting, it’s whether the EM-Power flag is enabled in the phone’s menu.

We have made Polycom aware of this issue and recommended that they set the EM-Power to “Disabled” by default as the vast majority of their phones will never be equipped with sidecars.